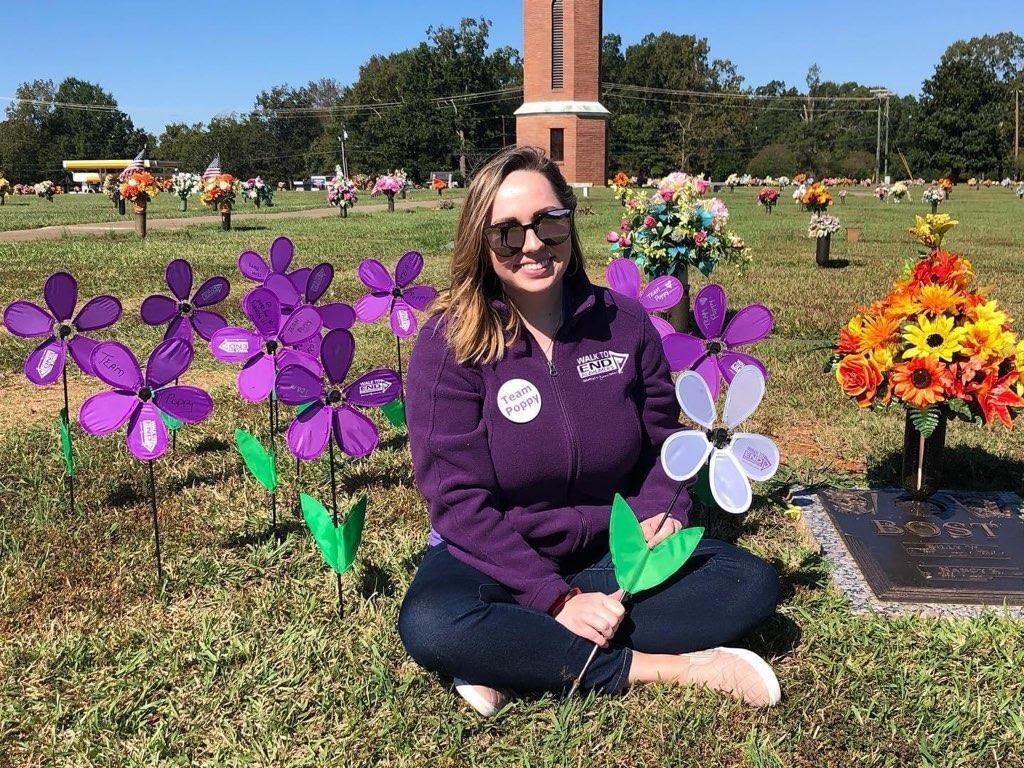 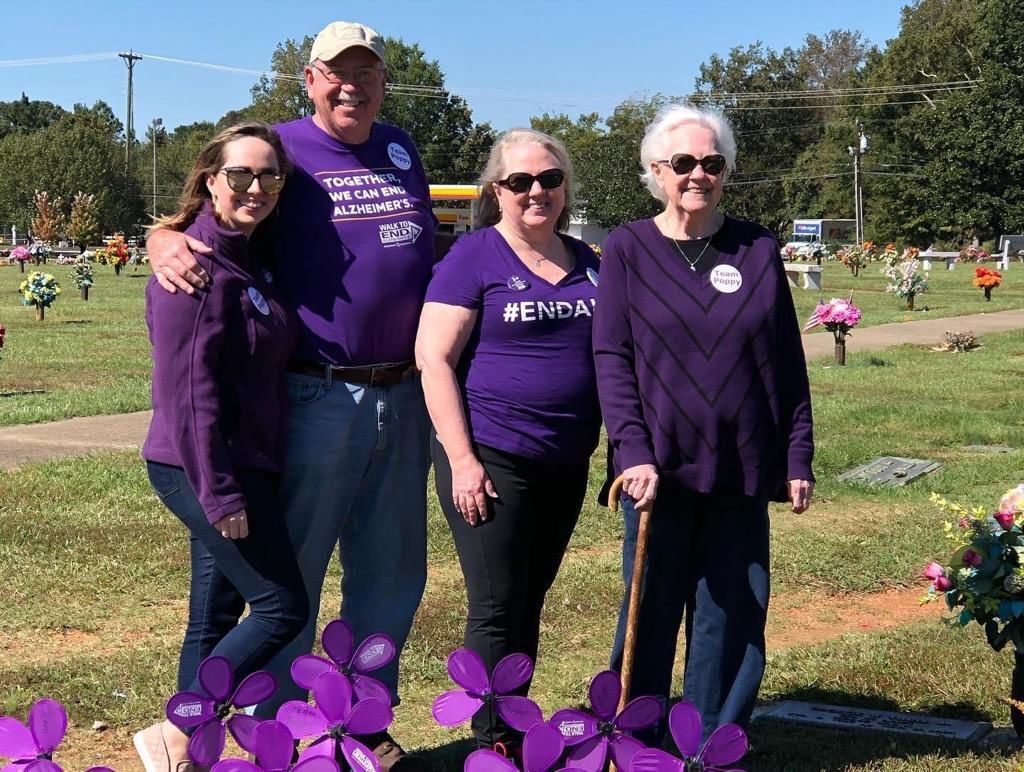 Maggie Hamilton with her parents and grandmother.

Maggie Hamilton with her parents and grandmother.

Maggie Hamilton remembers her grandfather as a “happy, loving, funny and Christian man” that took pride in his family and work. To her, he was Poppy, but to the community he was Bill Bost — a deputy sheriff with Rowan County for six years in the late 50’s and early 60’s before relocating to Union County where he was a special deputy for about 45 years.

Poppy has been Hamilton’s reason for volunteering with the Walk to End Alzheimer’s. Her first walk was in September of 2016 — four months after her grandfather passed away at 83 on May 18. She said the walk was in Kannapolis that year which was fitting, because her grandfather was born and raised there. She wanted to raise $3,000 in three months before the walk. By September, she raised $5,500. One of the fundraisers she held was a pancake breakfast at her church.

Since then, she has been involved with the walk as a participant, team captain, singer of the national anthem and planning committee member.

This year’s walk was done virtually in light of COVID and was held on Saturday, Oct. 17. There was a live opening ceremony at 10 a.m., but participants chose where they wanted to walk and their distance.

Though she enjoyed being part of walks in previous years, Hamilton said she preferred the virtual walk.

Hamilton’s grandmother — Poppy’s widow — was able to participate this year. Hamilton, her parents and grandmother went to his gravesite in Monroe and made a promise garden with flowers they collected from previous walks.

“We were able to have intimate, quality time and be a family,” Hamilton said. Adding that there were sad and happy moments.

Because it was a small, family affair Hamilton said it was “probably more meaningful” than some of the larger walks she had participated in.

Hamilton shared what it was like taking care of Poppy when he developed Alzheimer’s.

Hamilton’s mother knew it was time for Poppy to see a doctor about the possibility of Alzheirmer’s after attending a seminar on the disease presented by Dr. Charles Edwards from Memory Center Charlotte. Hamilton said her mother, mentally, went through the checklist of signs and symptoms of Alzheimer’s and ticked every box when thinking about things Poppy had either said or done.

They took Poppy to see Dr. Edwards to receive a diagnosis when he was 80 years old. Hamilton said her grandfather had “disoriented” to the point that he thought the family was taking him to an assisted living community to leave him.

Hamilton said Edwards made Poppy “feel seen.” At the end of the visit, Poppy said he thought Edwards “really liked” him.

“It was really hard watching him deteriorate, because with physical ailments you can give medicine to help the symptoms, but with Alzheimer’s you can’t explain to them why they’re feeling the way they are feeling and what to expect, because you don’t really know,” Hamilton said, “I think that is probably one of the hardest things, because it’s confusion for them, but it’s confusion for the family as well.”

“Over five million Americans are living with Alzheimer’s, and as many as 16 million will have the disease in 2050. The cost of caring for those with Alzheimer’s and other dementias is estimated to total $277 billion in 2018, increasing to $1.1 trillion by mid-century. Nearly one in every three seniors who dies each year has Alzheimer’s or another dementia,” a statistic from the association reports.

Poppy received care at home and for the last six months of his life, Hamilton took care of him. She said by that time, his memory had faded and he couldn’t remember who she was. She said that was a blessing in disguise, because he believed she was a nurse — not remembering that she was his granddaughter. Too, had he remembered who she was, Poppy would not have let her take care of him. Hamilton said, before the diagnosis, her grandfather prefered to take care of others instead of receiving care.

To take care of him, Hamilton left college even though it was not what her parents wanted. She was a student at Wingate University studying Communications.

She felt she needed to be with him as his only grandchild.

Hamilton said with Alzheimer’s, family members know their loved one will eventually pass on from the disease. She said it gives them time to say goodbye, plan for the goodbye and have closure.

Then she said with Alzheimer’s there’s really two goodbyes — goodbye to the person you knew and then the goodbye at the end of their life.

She said the first goodbye was “harder” than the last, because “it was such a slow goodbye.”

One of the symptoms of Alzheimer’s is the personality of the person suffering from it changes. They evolve into a completely different person. Hamilton said other relatives in her family who had Alzheimer’s became difficult people. Her family worried that would happen to Poppy, but she said he only had two episodes where he was aggressive.

She said he chose to be happy. “He was always such an incredibly happy person. Happiness was a choice. It wasn’t necessarily a circumstance.”

Too, she remembered a saying he would repeat — “everyday is a good day.”

Hamilton’s family has the quote inscribed on a sign that hangs in their home.

She said one of the ways to cope with a loved one living with Alzheimers is to laugh to keep from crying or cry through the tears.

Hamilton recalled a time when she heard her grandfather’s voice after several weeks of him becoming non-verbal. She said the sweet moment helped her cope with the disease.

Hamilton is a singer and her uncle is a musician. Together, they would sing for Poppy and the family.

One night, Hamilton and her uncle began singing the hymn “The Old Rugged Cross.” Poppy, Hamilton said, began singing along recounting every word and verse. The song was later played at his funeral, because Hamilton said it clearly meant something to her grandfather and was dear to him.

Her other pieces of advice and comforting words are:

Hamilton said Poppy’s stories were about people in his life and those stories in turn helped Hamilton know who her grandfather was.

Two — Understand that an Alzheimer’s diagnosis is “scary” for the person living with it, too, because they don’t know what to expect.

Three — “Don’t go into the traumas,” Hamilton said. Meaning, if a loved one with Alzheimer’s wants to know where a certain person is, but that person has been deceased for decades, tell the loved one that they are gone, but will return soon. “Don’t make it a traumatic thing for them if it’s going to break their heart. Don’t go into it.”

Four — Love them the best you can and use the time you have to say goodbye, Hamilton said.