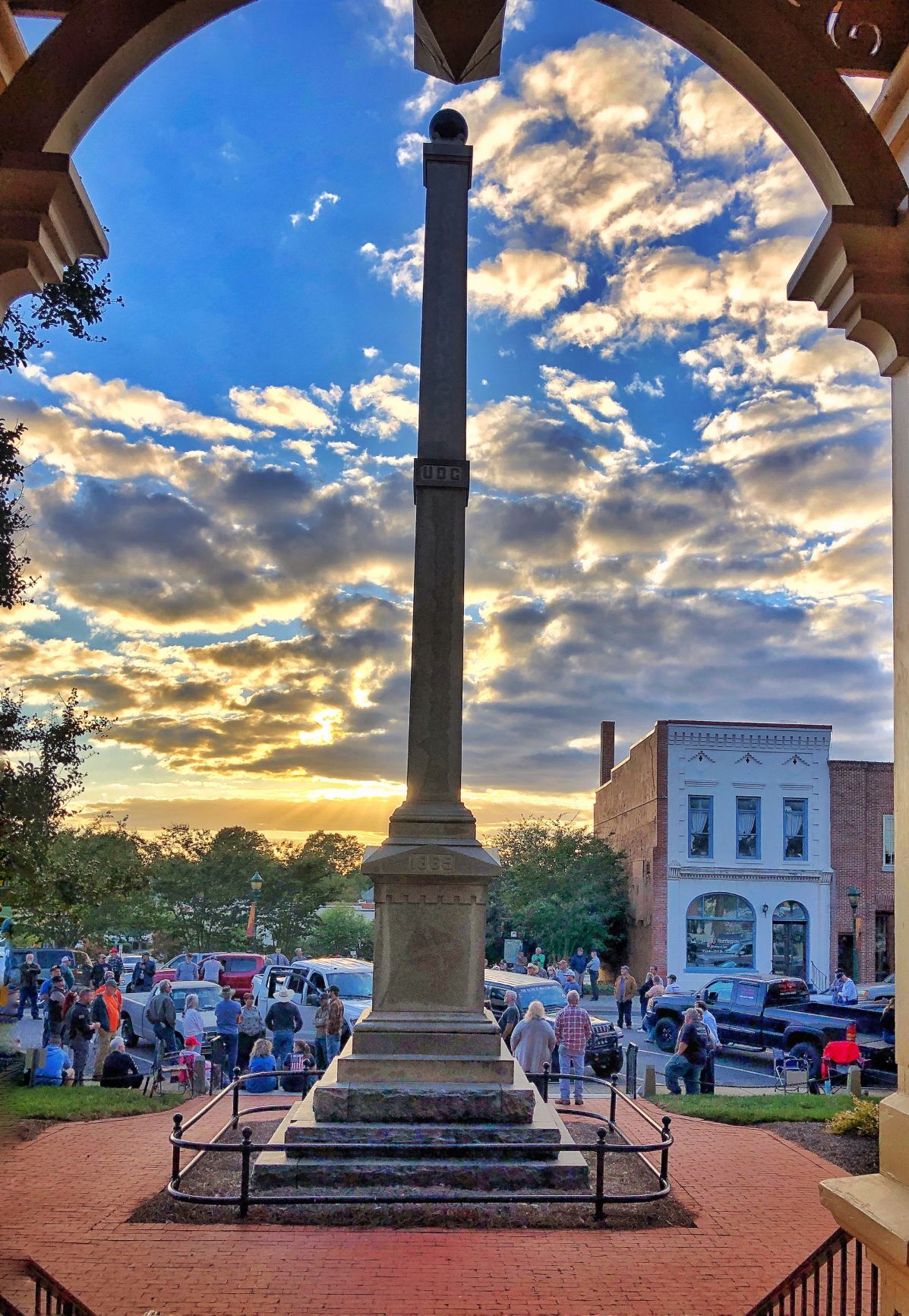 A group gathered in front of the monument on Main Street in Monroe to watch a live feed of the public hearing. 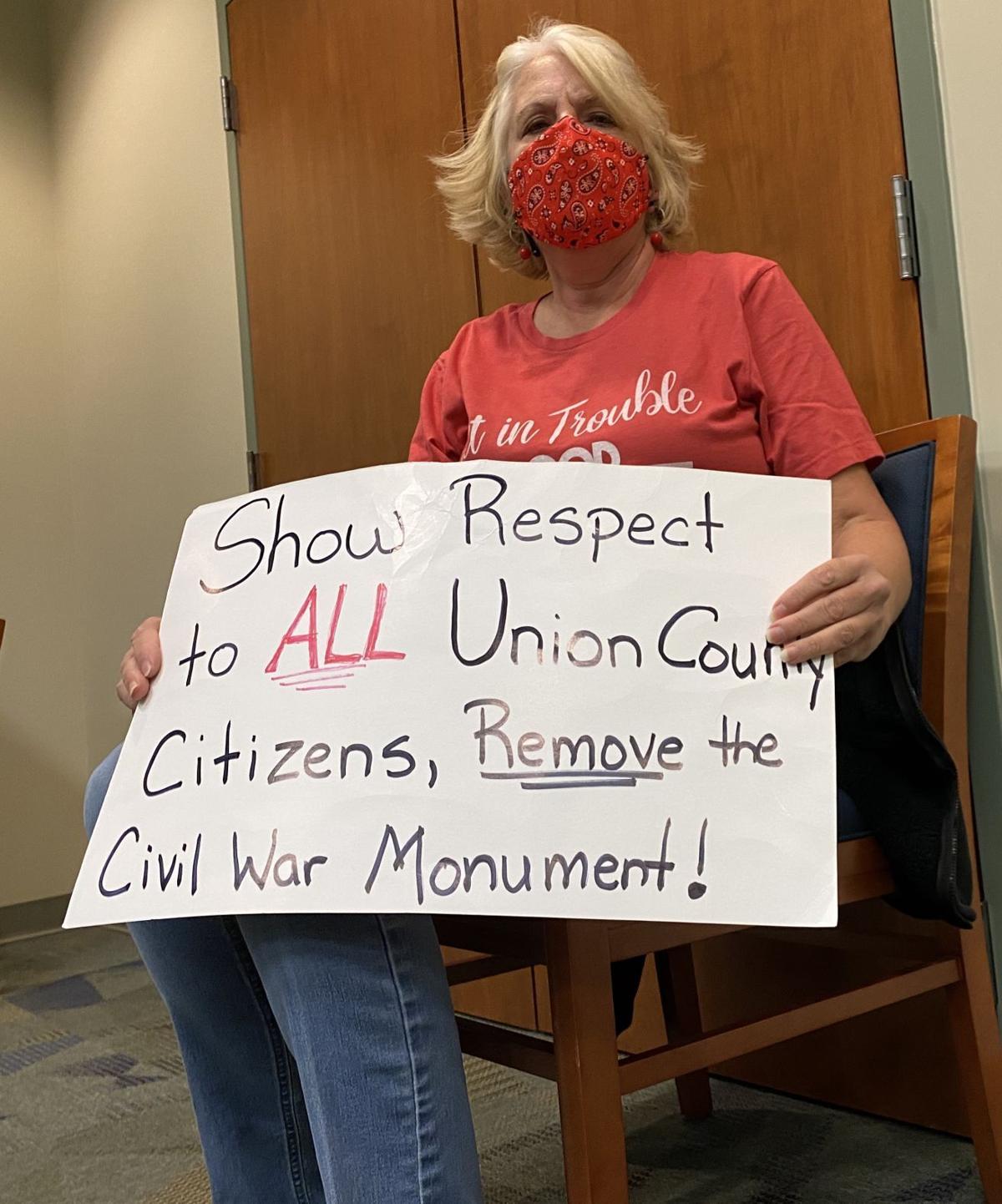 A resident of Union County at the public hearing held a sign calling for the removal of the monument.

A group gathered in front of the monument on Main Street in Monroe to watch a live feed of the public hearing.

A resident of Union County at the public hearing held a sign calling for the removal of the monument.

UNION COUNTY — With a minute to spare, the Union County Board of County Commissioners (BOCC) listened to nearly two hours of comments from county citizens on the location of the Confederate monument located in downtown Monroe in front of the Historic Courthouse on Monday.

The monument sits across the street from the Union County Government Center, where the commissioners took comments.

The BOCC held a special-called public hearing on Monday. Chairman Jerry Simpson said the meeting would last two hours at most and each registered speaker was given three minutes to comment. Because it was a public hearing, the Board neither took action nor voted.

They did not say when they would vote on the monument’s future.

Those who did not register but wanted to comment could submit their opinion to the commissioners to be kept for the record.

Two council members from the City of Monroe shared their opinions — Surluta Anthony and Franco McGee. They were speaking as citizens of Monroe, not in their capacities as council members.

Anthony asked: “is the monument fair for all citizens of Monroe,” and “does it build goodwill and bring people together?”

McGee spoke about the Lost Cause of the Confederacy, an ideology that perpetuates the notion that the cause of the war according to Confederate states was noble. That cause is often presented as fighting for states’ rights, but those unconvinced debate the war was about slavery instead.

McGee said, because Confederate monuments were constructed long after the Civil War, they are neither about history nor heritage. In his opinion, they represent “racism, hate and oppression.”

Michael Hall, a resident of Union County, shared his testimony about the direct impact slavery had on his family in Lancaster, S.C.

According to Hall, his great-grandmother was the daughter of a white landowner’s wife. That landowner was a Major in the Confederate Army. After the Major died, his wife had three children with Hall’s great-great-grandfather, who was a slave. Hall said his paternal step-grandmother worked for W.C. Heath, who was also a Major in the Confederate Army.

“I can remember as a child going into the house on Franklin Street and Ms. Laura Heath showing me the Confederate uniforms that she had in a chest,” Hall said. “I say this, because my parents didn’t get an opportunity to actually say how they felt about it, but they were offended by it. They were offended by it because their history had to be swept under a rug.”

He said he has “no problem” with the monument as long as it is in a “proper place” like a museum.

Gene Stowe, a Board member for the Museum of the Waxhaws and author of “Inherit the Land,” presented an idea on behalf of the museum. He suggested moving the monument to the museum campus, where educational displays could be placed around the monument.

“Relocation of the monument is an opportunity to preserve and enhance historical understanding, not to erase it,” Stowe said.

Stowe pointed out that where the monument is located in front of the Historic Courthouse does not have the space for such educational displays, because it was not designed for education.

According to Stowe, the granddaughter of the member of the Daughters of the Confederacy who designed it, and the builder who constructed the monument “is a friend of the museum and supports the relocation.”

The remaining speakers either shared about their ancestors’ involvement in the Civil War, or how they see slavery as being abhorrent and the monument representing a symbol of it. Many speakers shared Civil War history in their comments.

Some equated removing the monument with erasing history. Conversely, other speakers want the monument either removed or moved to a museum as a way to create a more welcoming place for residents of Union County or those visiting.