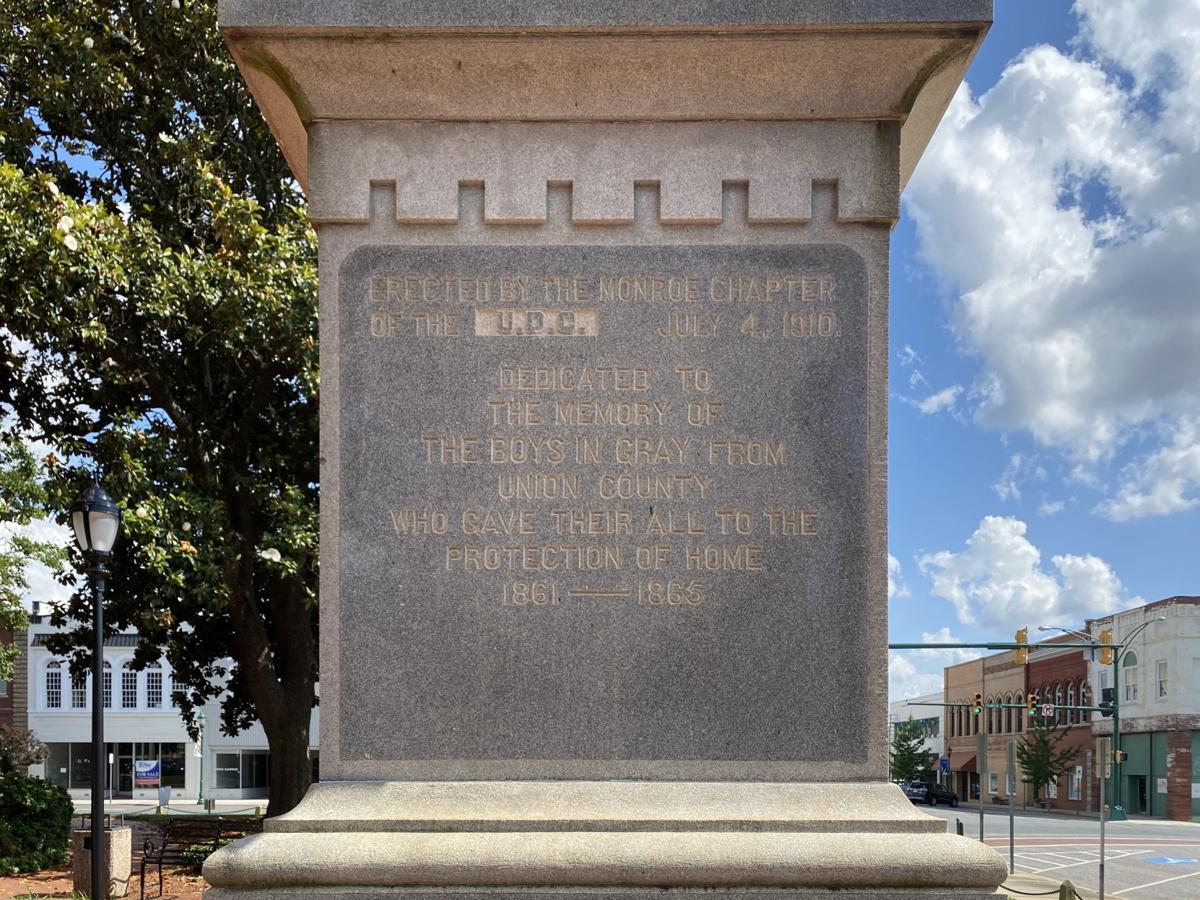 The inscription on the Confederate monument in Monroe reads: “Erected by the Monroe chapter of the U.D.C. July 4, 1910. Dedicated to the memory of the boys in gray from Union County who gave their all to the protection of home. 1861-1865.” 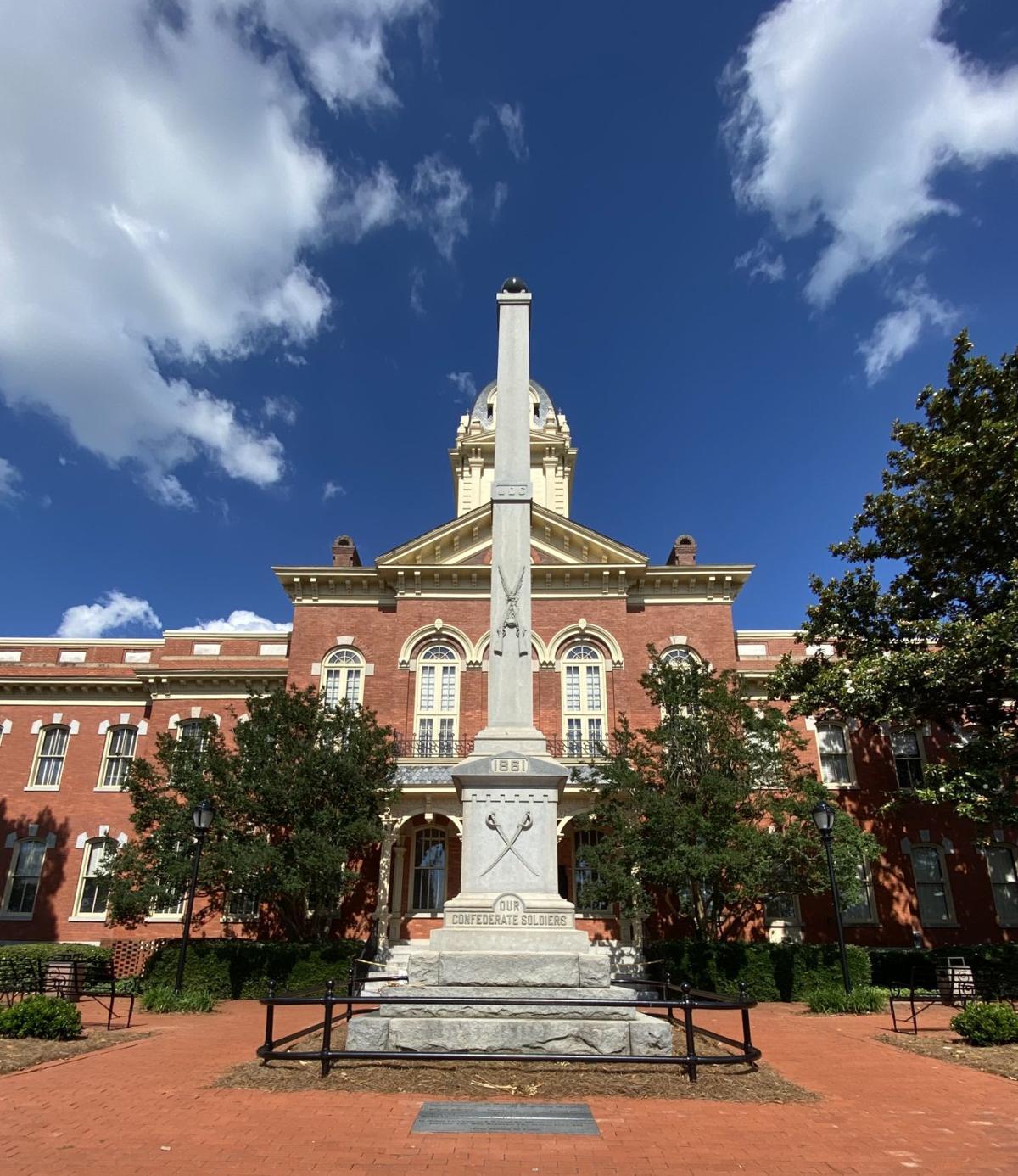 Jordan Britton’s family has roots in the area that go back 300 years, and he wants to see the Confederate monument come down.

The inscription on the Confederate monument in Monroe reads: “Erected by the Monroe chapter of the U.D.C. July 4, 1910. Dedicated to the memory of the boys in gray from Union County who gave their all to the protection of home. 1861-1865.”

Jordan Britton’s family has roots in the area that go back 300 years, and he wants to see the Confederate monument come down.

MONROE — According to the Southern Poverty Law Center, as of July 7, there have been 30 Confederate symbols either removed or relocated since the death of George Floyd on Memorial Day — 24 monuments and one flag have been removed, and five monuments relocated.

One of the remaining monuments sits on the front steps of the historic courthouse in downtown Monroe. Might it be removed or relocated?

Britton submitted an op-ed to The Enquirer-Journal on June 29 explaining why he thought the monument should be taken down.

The Enquirer-Journal spoke with Britton to discuss the op-ed, due to the social significance of the Black Lives Matter movement.

Britton starts the op-ed by establishing his Union County credibility. The maternal side of his family has deep roots that spread out over 300 years. His mother’s maiden name is Starnes. He received an education at Prospect Elementary, Parkwood Middle School and Parkwood High School.

“Monroe and Union County are my home,” he wrote. “I am proud to be from Monroe.”

But he describes the Confederate monument as a “dark mark” on Monroe.

The Confederate monument was erected in 1910 by the United Daughters of the Confederacy. On July 4, 1910, it was celebrated with a speech from then NC Attorney General Walter Bickett, who was from Monroe.

Bickett, at the dedication of the monument a century ago, said to veterans of the Civil War:

“But if your fight was glorious, your fall was sublime, and this is the rarer virtue. Adversity is the supreme test of character… Your crowning glory lies in the fact that on the field of battle you acted like men, in the hour of defeat you acted like gods. This was the crucial test, the temptation that came to you in the wilderness of despair, and from its darkness and desolation, you emerged with souls unsullied, heroes still, with ‘hearts of gold...’

“Immutable as the rocks and glorious as the stars they stood for a white civilization and a white race, and today North Carolina holds in trust for the safety of the nation the purest Anglo-Saxon blood to be found on the American shores. And the nation is beginning to realize how well you served it when, in the hour of utter desolation, you refused to be defiled.”

A generation a century ago built monuments glorifying soldiers who died in the Civil War and veterans of the war; however, young people today are removing those same monuments. In Britton’s opinion, the difference in generations is the speed at which a message can be communicated and how quickly that message can gain support through tools like social media.

“I think there is a willingness to speak up for what is right,” he said.

Too, Britton speculates that how the Civil War is taught in schools has led to a change in how younger people view the war. Past generations of Southern students learned about the “Lost Cause.”

“The Lost Cause is an interpretation of the American Civil War (1861-1865) that seeks to present the war, from the perspective of Confederates, in the best possible terms. Developed by white Southerners, many of them former Confederate generals, in a postwar climate of economic, racial, and social uncertainty, the Lost Cause created and romanticized the ‘Old South’ and the Confederate war effort, often distorting history in the process... The Lost Cause has lost much of its academic support but continues to be an important part of how the Civil War is commemorated in the South and remembered in American popular culture,” according to Encyclopedia Virginia.

Today, Britton believes American history textbook publishers and American history curriculums are starting to put forth more effort to include a variety of voice, perspectives on the Civil War beyond white people and further white Southerners.

“I think there’s a movement among Americans to reckon with and recognize that there’s an ultimate history that we haven’t always been taught,” Britton said.

School textbooks are one source of information on the Civil War, and there are plenty of other sources about the war and American Southern history written by historians.

Britton, on the difference in generations a century apart, said: “I think we are always making progress — generation after generation. We’re always moving forward.”