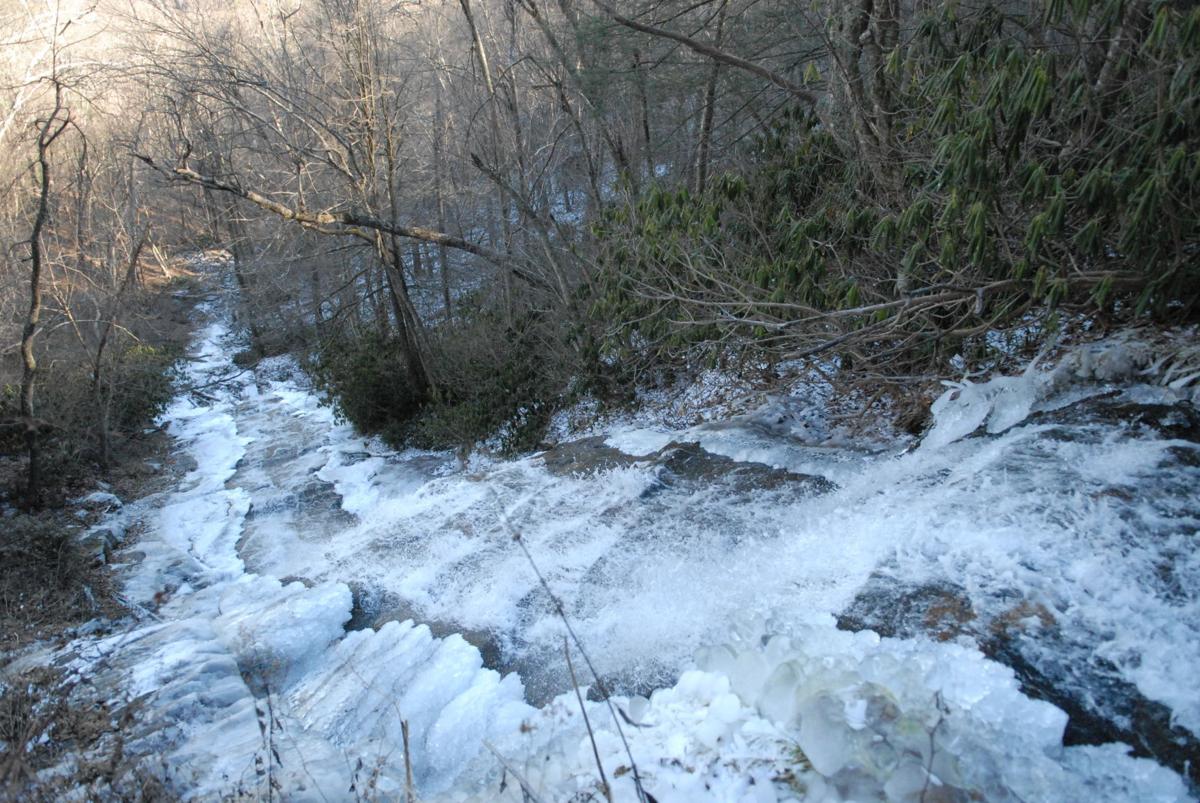 Cascades waterfall is reached by a side trail less than a half-mile long off the Mountains to the Sea Trail in the Blue Ridge Parkway’s E.B. Jeffress Park. The waterfall, on upper Fall Creek in Wilkes County, is about 100-feet long.

Mount Jefferson in Ashe County is shown from a Blue Ridge Parkway overlook on the Mountains-to-Sea Trail.

Cascades waterfall is reached by a side trail less than a half-mile long off the Mountains to the Sea Trail in the Blue Ridge Parkway’s E.B. Jeffress Park. The waterfall, on upper Fall Creek in Wilkes County, is about 100-feet long.

Mount Jefferson in Ashe County is shown from a Blue Ridge Parkway overlook on the Mountains-to-Sea Trail.

EDITOR’S NOTE: This feature appeared in the March 10, 2021 Wilkes Journal-Patriot as part of its series of articles on the trails of northwestern North Carolina.

About 700 miles of the trail are complete, including a 44-mile section from the intersection of the Blue Ridge Parkway and U.S. 421 at Deep Gap in Watauga County to the Parkway’s Devil’s Garden Overlook on the Wilkes-Alleghany county line.

This 44-mile section mostly weaves in and out of Wilkes County where it borders Ashe and Alleghany counties. It’s never very far from and often crosses the Parkway, yet allows something approaching a feeling of wildness due to the surprisingly wide Parkway corridor.

The close proximity of this section to the Parkway allows great flexibility in length of hiking trips.

The trail follows the crest of the Eastern Continental Divide much of the way, affording dramatic long distance views into the Wilkes foothills and Piedmont beyond on one side and rugged Ashe mountains like Snake and Three Top in the Amphibolite Range and Alleghany’s more pastoral Peach Bottom Range.

From U.S. 421 at Deep Gap, northbound you’ll immediately enter a forest of white pines, hardwoods and spring wildflowers on the right and gain 650 feet in elevation while going up Fire Scald Mountain.

You’ll cross to the other (west) side of the Parkway at the Lewis Fork Overlook and reenter woods.

After about three-tenths of a mile, you’ll cross back to the Parkway, reenter woods and hike a little over a half mile on a flank of Thompkins Knob before coming out on the Parkway at the historic lCool Springs Baptist Church and Jesse Brown cabin. Both are log structures.

Circuit-riding preachers such as Willie Lee and Bill Church delivered sermons at the church.

At 4,075 feet, Thompkins is the tallest mountain in Wilkes and the place where Wilkes, Ashe and Alleghany corner.

Jefffress Park is named for a Greensboro newspaperman and Parkway advocate who helped prevent it from becoming a toll road while chairing the N.C. Highway Commission.

For the next 4.1 miles, hikers are keenly aware of being on the escarpment of the Blue Ridge Mountains.

You’ll cross gravel Phillips Gap Road, not far from Appalachian State University’s Dark Sky Observatory, and then reach Benge Gap, where gravel Benge-Ashe Road intersects with the Parkway on the east and paved Park Vista Road intersects on the west. Go to https://dso.appstate.edu/ for details on public viewing sessions at the observatory, currently available on Zoom.

From the church, cross to the east side of the Parkway and follow the other end of Blue Ridge Baptist Church Road about 500 feet and enter the woods on the left where the trail follows a small stream.

You’ll soon pass through a pasture with outstanding views of Grandfather, Sugar, Beech and a slew of other peaks to the southwest and west. Cross Blue Ridge Baptist Church Road again, pass near Calloway Gap Road (named for Elijah Calloway), pass a backcountry campsite on headwaters of Obids Creek and then reach Daniel’s Gap (named for Daniel Long) at the six-mile mark of this 44-mile section.

From there it’s about one mile, mostly on the western flank of Meditation Mountain, to where the Parkway and the MST cross N.C. 16 at Glendale Springs and then another mile to the end of this section at Jumpinoff Rock Overlook on the Parkway.

The next portion features more moderate terrain and at times follows secondary roads, but still offers impressive views. It passes by the Northwest Trading Post (normally open from May to October).

It also passes near the Glendale Springs Inn, Raccoon Hollar Campground and Mountain View Lodge and Cabins. It ends near the Sheets Cemetery and Sheets Gap Road, where the earliest members of this pioneer northwest North Carolina family are buried.

This portion passes by pine nurseries, big hemlocks and through carpets of running cedar and is considered a good choice for trail runners.

The tread is even, starting with a general downhill stretch, has a mellow mid-way climb (gaining about 260 vertical feet in about a mile), and finishes with a descent to trail’s end.

Highlights include the Jesse Sheets log cabin (built in 1818) and the Laurel Fork bridge before it ends on Laurel Fork Road in Laurel Springs.

You’ll veer significantly away from the Parkway twice on this pastoral segment, at the very beginning and very end, but otherwise stay close to the scenic highway.

The trail passes near Station’s Inn, Woody’s Campground and Freeborne’s Eatery & Lodge in Laurel Springs before turning onto Miller Road, which runs parallel to the Parkway.

Millers Campground is along Miller Road. This segment ends at the Basin Cove Overlook.

Many consider this to be one of the most scenic stretches of the entire MST.

The trail passes through high mountain meadows, goes atop the Alligator Back outcrop, affords a view from Wildcat Rock into the Caudill Cabin in Basin Cove and more in Doughton Park.

This segment ends at the Doughton Park Campground and affords a stop at the iconic Bluffs Restaurant.

The MST leaves the Parkway in dramatic fashion, taking in more of Doughton Park before dropping down the Blue Ridge escarpment into Stone Mountain State Park for its journey east across the Piedmont and coastal plain.

The segment begins with a mile of beautiful meadow hiking before entering a hemlock forest and emerging at the Brinegar Cabin, where Martin and Caroline Brinegar made their home from around 1880 until 1930.

From there the MST heads south from the Parkway and down the Blue Ridge escarpment in Stone Mountain State Park before connecting with a new MST section partly completed between the state park and Elkin.