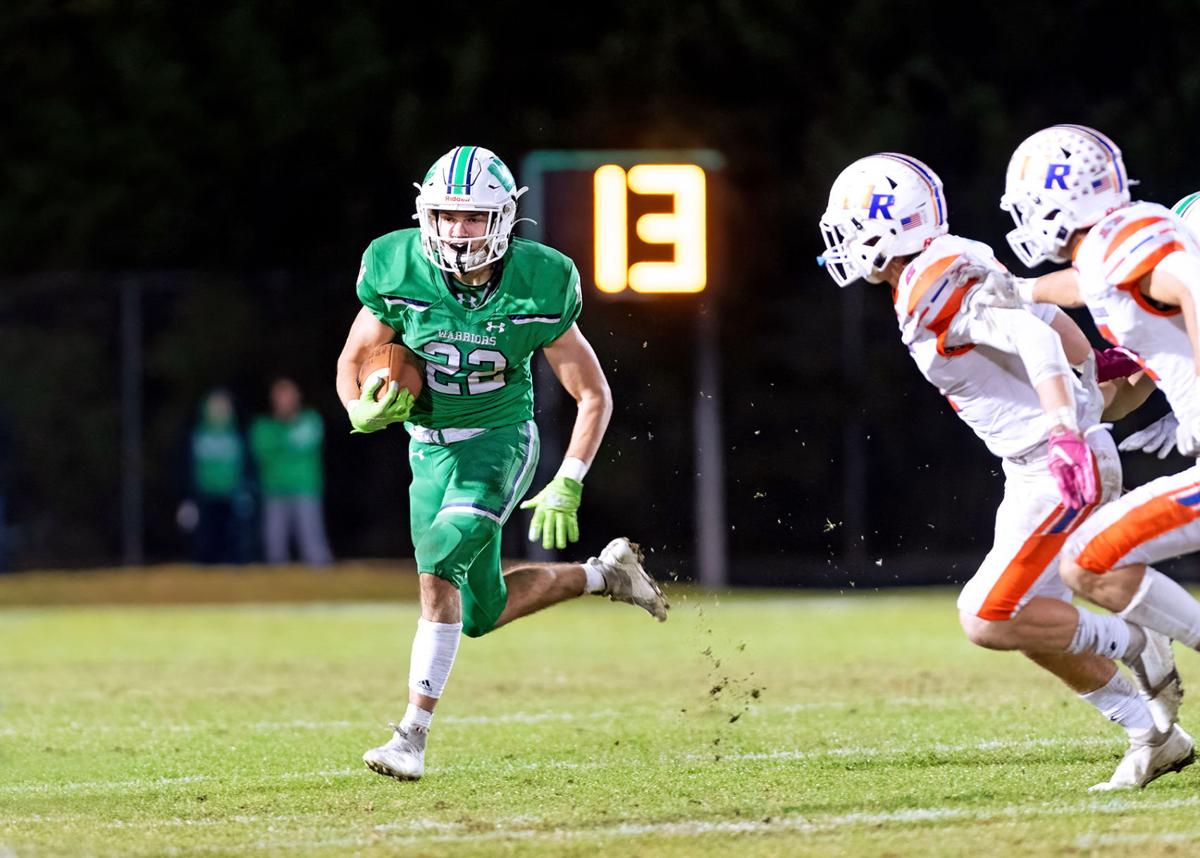 Weddington senior tailback Kyle Parsons (22) rushed for 250 yards and three touchdowns in his team’s playoff win against Marvin Ridge on Friday. In two games against the Mavericks this season, Parsons had 515 rushing yards and five TDs. 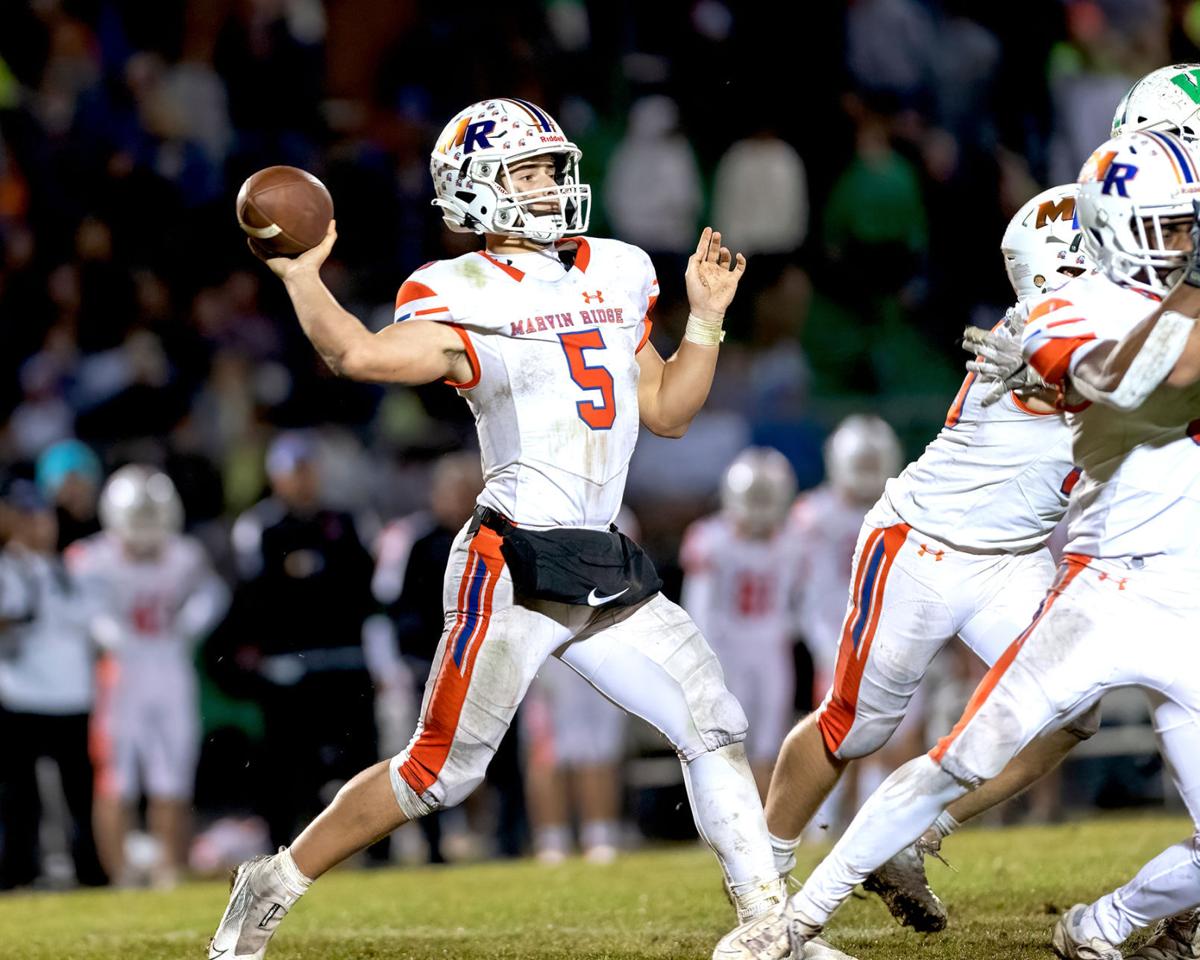 Weddington senior tailback Kyle Parsons (22) rushed for 250 yards and three touchdowns in his team’s playoff win against Marvin Ridge on Friday. In two games against the Mavericks this season, Parsons had 515 rushing yards and five TDs.

WEDDINGTON — Two weeks ago, in its regular season finale, the Weddington High football team had to hold off a furious comeback from Marvin Ridge to earn a five-point victory and clinch the Southern Carolina Conference title.

Friday night, the Warriors played the Mavericks for the second time in 14 days — this time in the second round of the 4A state playoffs. And despite another spirited attempt by Marvin Ridge to stay in the game, Weddington was too much to handle, advancing to the third round with a 41-31 home win.

“Marvin Ridge had no quit in them, but our guys have been battle-tested,” said Weddington head coach Andy Capone. “Early in the year we played tight games all the way through. There were a handful of games where we were down at half or tied at half. We just told them you have to play for 48 minutes. They’ve really grown throughout the year, and you can see the maturity starting to show.”

Weddington improved to 11-1 on the year and ended the Mavericks’ season at 8-3.

Trailing 27-24 with a little more than five minutes to go in the fourth quarter, Marvin Ridge forced a Weddington into a three-and-out. But the punt was muffed by Marvin Ridge and ultimately recovered by Weddington at the 11-yard line.

Weddington senior running back Kyle Parsons rushed for 250 yards and three touchdowns on 27 carries. The Wofford commit rushed for a school-record 265 yards and two touchdowns against the Mavericks two weeks earlier.

“He’s just playing at a high level and he’s playing with a lot of confidence,” Capone said. “I think four of our last five games shows his durability and the work he put in during the offseason and his strength. He’s got great vision and does a great job not letting one guy bring him down. We’re running the ball at a high level now and we have to keep it going.”

The emergence of Weddington’s ground game has turned the Warriors into one of the best offenses in the state. Parsons averaged just 61.3 yards per game over the first four games of the season, but in his last eight he’s averaging 150.4 yards per game and has scored 14 touchdowns.

“The last two times we’ve played Marvin, the offensive line has played so well,” Parsons said. “All the guys have been working really hard, and they just kept pushing and working hard the whole game. We didn’t really do anything special. I just got behind them and they just pushed and pushed and gave me room to go. It was just a battle. It was about who wanted it more. Our guys wanted it more and it opened up everything for us.”

Weddington also did some damage through the air. The Warriors’ first touchdown was a 48-yard pass from senior Grady Brosterhous to junior Griffin Reimer.

Brosterhous also found senior Landyn Backey later in the game for a 42-yard touchdown and finished the game 11-of-18 for 165 yards and two scores. For the season, Brosterhous has completed 62.3% of his passes for 2,054 yards and 21 touchdowns against just four interceptions.

Awaiting the Warriors in the third round of the 4A state tournament is Cuthbertson; on Oct. 22, Weddington defeated the Cavaliers by 15 points (28-13).

The Warriors fell behind, 13-0, to the Cavaliers in their first meeting.

“We’ve got to start faster ...” Capone said of the third round matchup with Cuthbertson. “They did a good job a few weeks ago of hitting us with a trick play on the first play of the game. We spotted them 13 and we just had to claw back. We just have to figure out how we can start ahead and not necessarily play from behind all the time. We’ll focus on it during practice this week, make sure we’re playing the way we have and clean up some of the mistakes. I don’t ever expect us to be perfect, but we can limit the turnovers, limit the bad penalties at inopportune times. If we do that, I think we’ll give ourselves a shot.”

The Mavericks, who placed second in the SCC, will lose 15 seniors this offseason, including defensive standouts Devin Reed and Brady Villa and two-way players Luke Raykovicz and Alex Meeks.

The Mavericks will continue to lean on QB Evan Medders, who has two years of eligibility remaining. In two seasons as Marvin Ridge’s starting quarterback, Medders has completed 64.7% of his passes for 2,479 yards and 22 touchdowns against 10 interceptions. He’s also run for 1,050 yards and 12 touchdowns on 199 career carries.