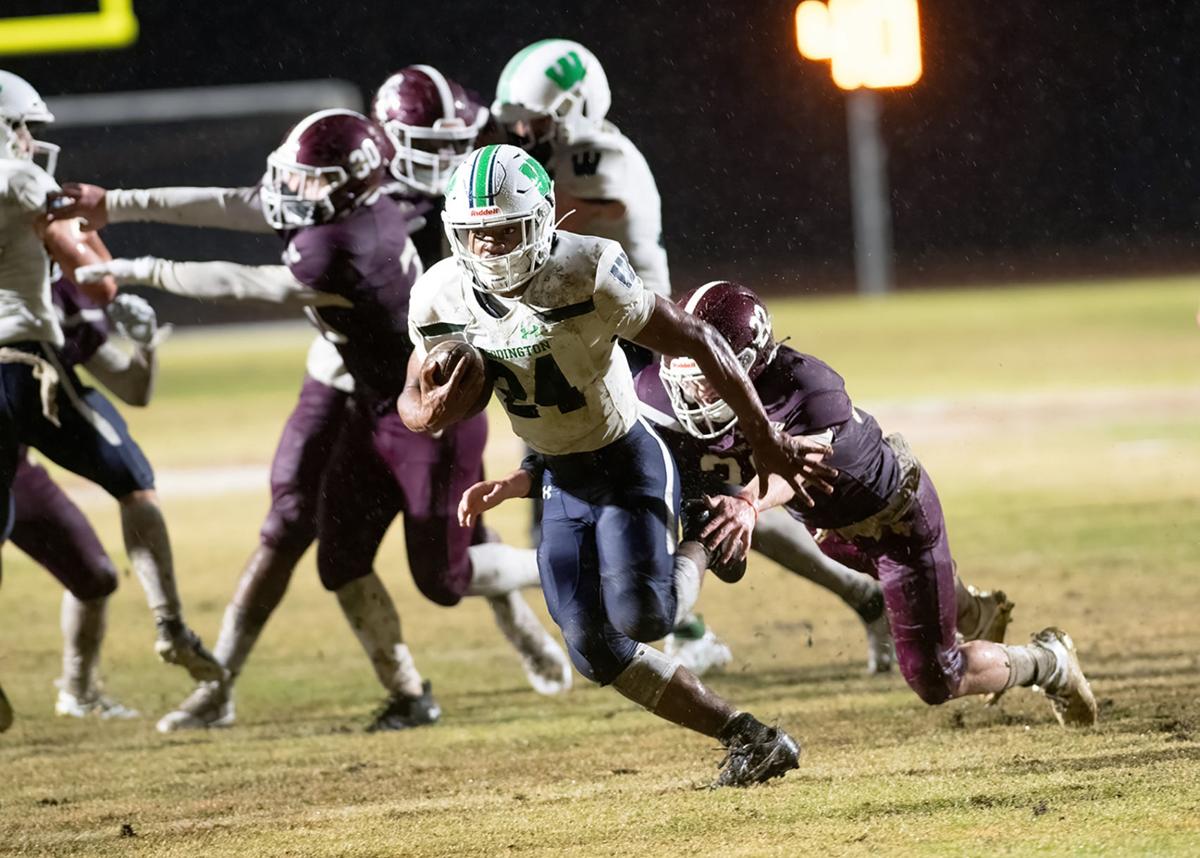 Weddington senior running back Trey Gordon (24) had a 62-yard touchdown run in Week 1. 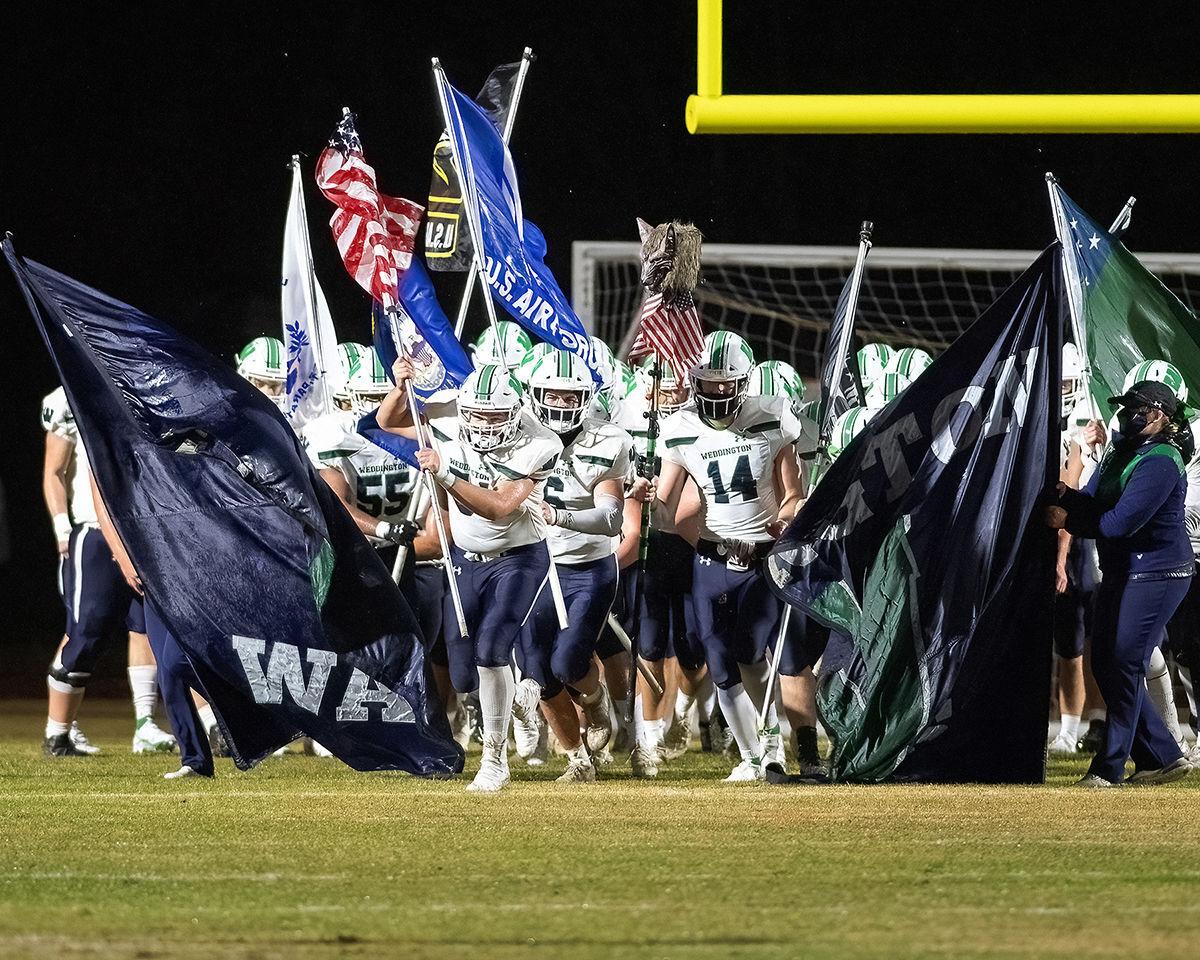 Weddington’s football team opened its state title defense on Friday. The Warriors have won back-to-back 3AA state championships and the program is on a 27-game winning streak that dates back to 2018.

Weddington senior running back Trey Gordon (24) had a 62-yard touchdown run in Week 1.

Weddington’s football team opened its state title defense on Friday. The Warriors have won back-to-back 3AA state championships and the program is on a 27-game winning streak that dates back to 2018.

Despite a prolonged offseason and numerous other changes brought on by the COVID-19 pandemic, the Warriors again looked like one of the state’s dominant programs in a 43-2 road win over Sun Valley to open the season.

The Warriors (1-0) only gained 205 total yards of offense Friday night, but it was more than enough to dispatch the Spartans — who didn’t return a starter from last season.

Weddington was led offensively by the running back duo of Trey Gordon and Kyle Parsons, who combined for 145 yards and a touchdown on just 13 carries in their first game since taking the reins from former Weddington running back and current Clemson freshman Will Shipley.

Gordon opened the scoring Friday with a 62-yard touchdown run in the first quarter.

“I thought they both ran the ball well,” head coach Andy Capone said about his running backs. “Trey had that big run early. He’s such a tough runner. Not one guy is going to bring him down. He enjoys running through people, and Kyle’s the same way. He’s able to break some long ones, but he’s a tough runner. I think they both learned from Will and they feed off each other right now. We feel good about the 1-2 combo we have.”

Returning for his senior season, Weddington starting quarterback Dante Casciola only attempted nine passes Friday night, but he completed five of them for 34 yards and two touchdowns without throwing an interception. Last season, Casciola threw for 1,571 yards and 26 touchdowns against 10 interceptions.

The Dayton commit’s first touchdown pass of the night went to junior Brooks Johnson, extending Weddington’s lead to 16-0 in the first half. On the Warriors next possession, Casciola found senior Kambridge Tuttle for a 13-yard score.

“It felt great being on that field and getting back out there with this senior class,” Casciola said. “We’re a really tight-knit group. The weather conditions made it not ideal, but I’m really proud of the way our team played.”

Sophomore kicker Matthew Moonan was 4-for-5 on extra points (one blocked) and made a 44-yard field goal in Friday’s win. Moonan takes over for former kicker Ian Williams, who made 88-of-92 PATs and 6-of-12 field goals in 2019.

“We stress as a team that we need to be great in all three phases,” Casciola said. “Gage returning that punt was huge for us, and I’m not sure if our defense even gave up a first down. They’re a great group. And offensively, we have a great offensive line and great running backs and great receivers. It makes my job easy. I just have to take care of the football and get it to our playmakers.”

In a normal year, the Warriors would get several non-conference games to prepare for the heat of conference play, but that won’t be the case this season. This Friday, Weddington meets Charlotte Catholic, the three-time defending 3A state champions, on the road.

Weddington won last year’s meeting, 45-0, but the Warriors were shut out by Catholic, 20-0, in their last trip to Keffer Stadium in Charlotte on Sep. 28, 2018. Head coach Andy Capone’s team has won 27 straight games since that loss.

“Obviously (Catholic) wants to get the ball to Paul Neel. He’s a great running back. But we have to play assignment football, because if we fall asleep and try to put all the emphasis on him, they’re going to hit one deep on us,” Capone said. “We have to make sure we’re gap and assignment sound. It’s a lot of work with all the different formations and plays and all they do. We’re happy with where we are defensively, but I think the biggest thing for us to compete is to play for a full 48 minutes and expect a dog fight. Last year, our kids were locked in all week, and this year we have to do the same.”