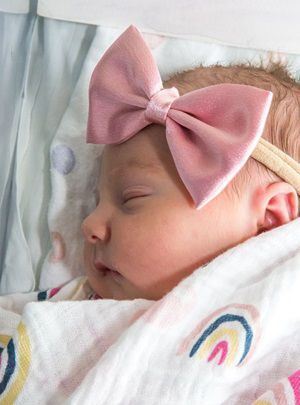 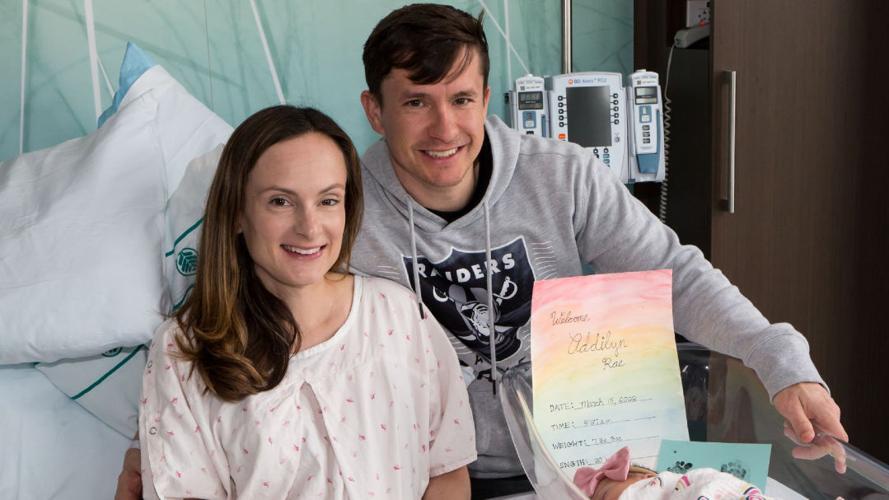 Cheryl and Jon Saffles planned on having their baby in Charlotte, but the labor was short, so they are glad they could go to Atrium Health Union West, which is just 10 minutes from their home.

Cheryl and Jon Saffles planned on having their baby in Charlotte, but the labor was short, so they are glad they could go to Atrium Health Union West, which is just 10 minutes from their home.

STALLINGS — Cheryl Saffles woke up around 2 a.m. on March 15 with contractions. Things were progressing quickly, and by 3 a.m. the nurse from her OB/GYN practice told her to make her way to the hospital. While Saffles’ husband, Jon, packed the car, she called her mom, who was staying at a nearby hotel — on stand-by for this very moment. When Saffles’ mom arrived 40 minutes later to watch their three-year-old daughter, Cheryl and Jon hit the road.

Saffles’, a social worker at the Union County Health Department, and Jon, a teacher at Porter Ridge High School, live in Indian Trail, about 30 minutes south of uptown Charlotte. Saffles was under the care of the team at Eastover OB-GYN throughout her pregnancy and planned on delivering at Atrium Health Carolinas Medical Center (CMC) in Charlotte. But baby Saffles had other plans.

“We still planned on going to CMC when we left the house, but we realized on the way that we weren’t going to make it,” Saffles said. So she and Jon decided to make a pit stop at Atrium Health Union West. Located just off U.S. Highway 74, and 10 minutes from their house in Indian Trail, the Saffles say the new Stallings hospital was the perfect haven. “It’s kind of a miracle that the hospital was right there,” Saffles said.

As soon as the Saffles arrived, the team with Atrium Health Women’s Care Creek Pointe OB-GYN, who have a home base at Union West, sprung into action to safely deliver baby Saffles. “We got to the hospital at 3:55 a.m. and we thought we might not make it to a room,” Cheryl said. “But we made it to the room just in time to start pushing.”

Addilyn Rae Saffles was born on March 15 at 4:27 a.m. measuring 7 pounds and 3 ounces. Addilyn is one of the first babies to be born at Union West — and she is the first baby Tamara Meekins, M.D., has delivered at the Union County hospital. Meekins started with Creek Pointe OB-GYN when the practice was formed in 2021. She worked as a general OB-GYN at Atrium Health Union in Monroe for six years and transitioned to an OB hospitalist role with the Creek Pointe practice when she returned to work from having twins.

“The Saffles family is a prime example of how this hospital bridges the gap between counties,” Meekins said.

“There’s no doubt that we will be able to provide many people critical access to care at this location.”

“If we had continued on to CMC, she would have been born in the car,” Jon said. “Plus it was nice to be close to home so Jon could check in on our older daughter and grab a few necessities before we brought Addilyn home,” Cheryl said.

For the Saffles, the care was key to a calm, healthy delivery. “The staff was so kind and helpful, which was great for me because it was a scary situation,” Cheryl said. She adds that it was reassuring to see the teams working together despite the change of plans. “Everything happened so fast, it was all a blur,” Cheryl said. “But everyone worked together and made me feel as comfortable as possible in the moment. The nurses coached me through the birth and were so comforting.” Cheryl specifically recalls the support of her care team, including Verona Adams, RN, Solange Doldron, RN and Brittney Horne, RN.

“Labor and delivery can be unpredictable, but our team was able to step into action as soon as we were notified,” Meekins said. “We come to work ready for moments like this because we spend years learning how to provide emergency care. This is a standard I feel we strive to uphold across the women’s service line at all our hospitals.”