Sign Up
Log In
Purchase a Subscription
You are the owner of this article.
Edit Article Add New Article
You have permission to edit this article.
Edit
Home
News
Coronavirus
Sports
Viewpoint
Features
Obituaries
e-Edition
Classifieds
Autos
Homes
Share This
1 of 5 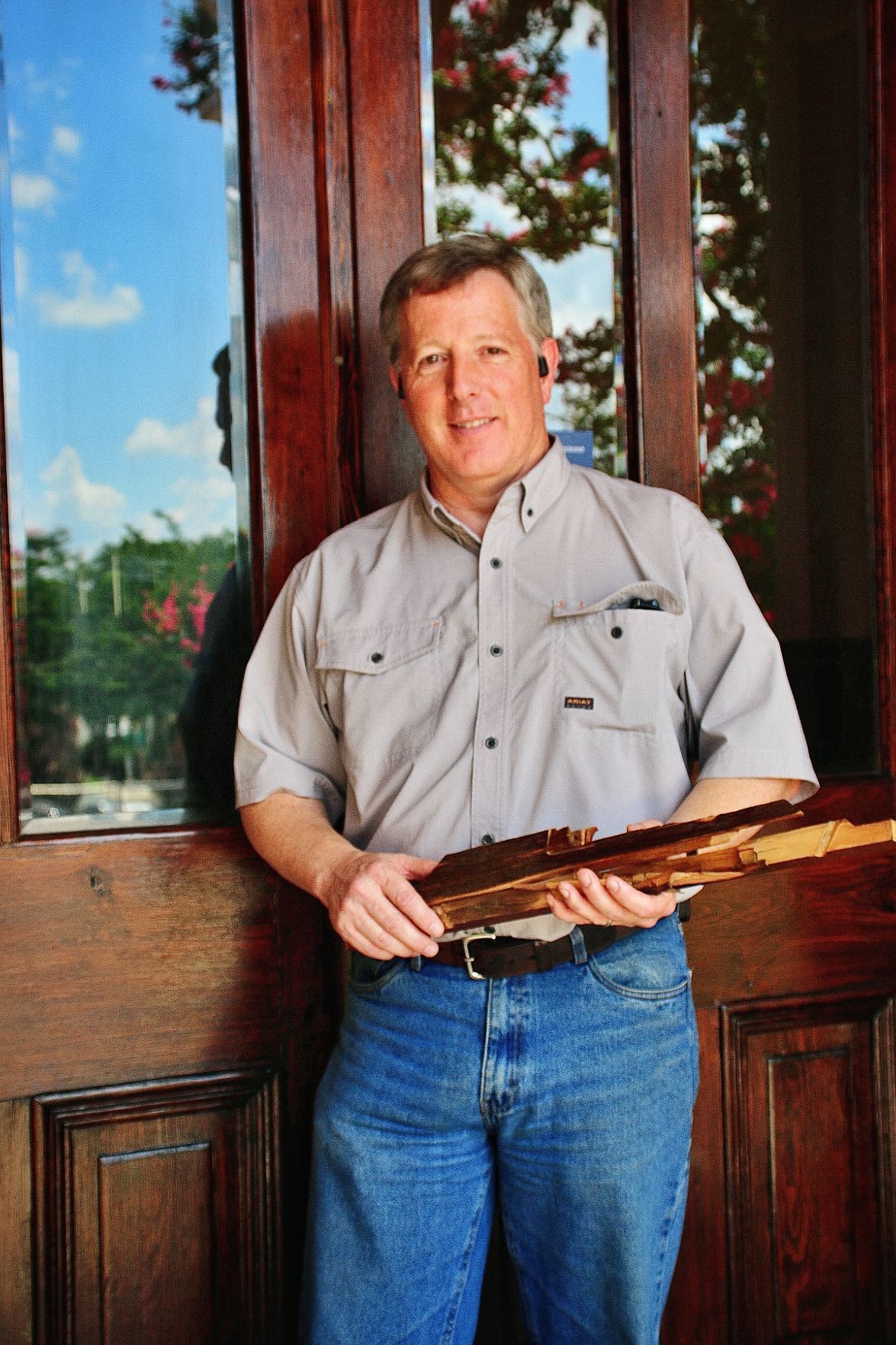 Dale Loberger is shown in front of the repaired doors holding original pieces that were broken off when the doors were damaged. 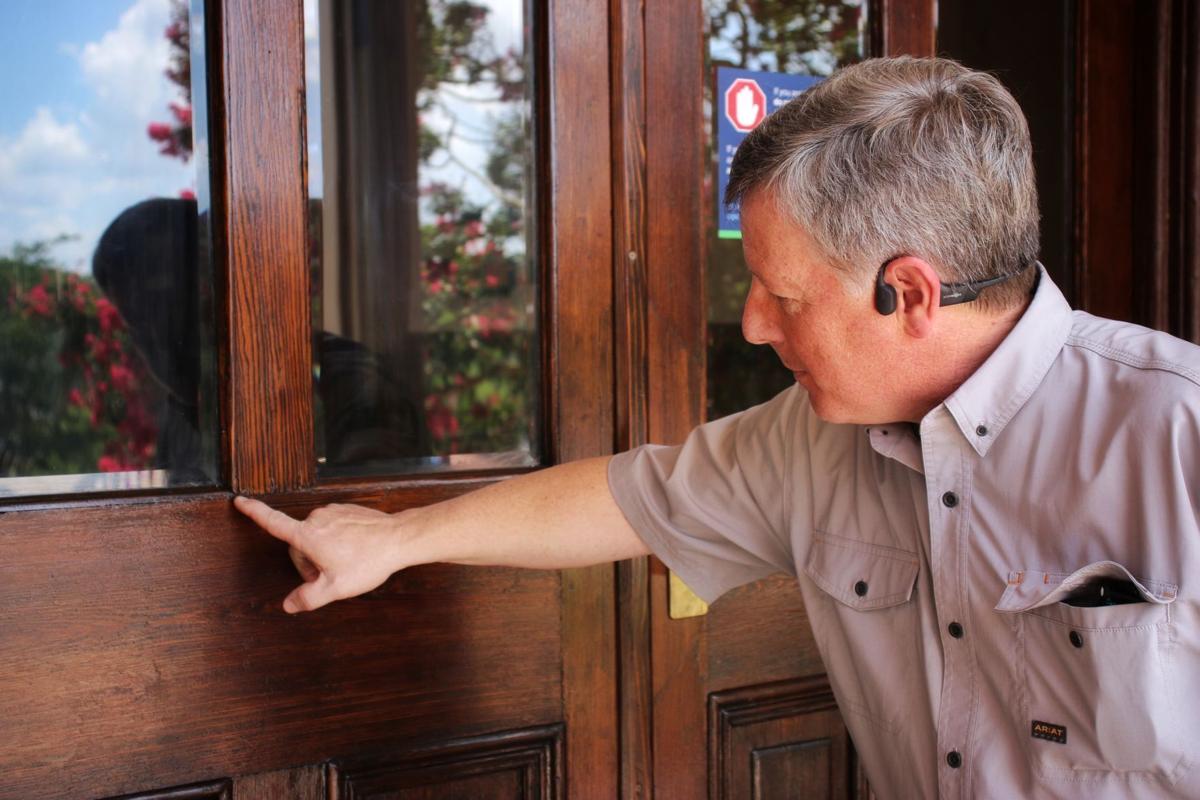 Dale Loberger points out repair work done on the doors. The glass panes are not original to the doors; however, they have been there for around 50 years, he estimated. 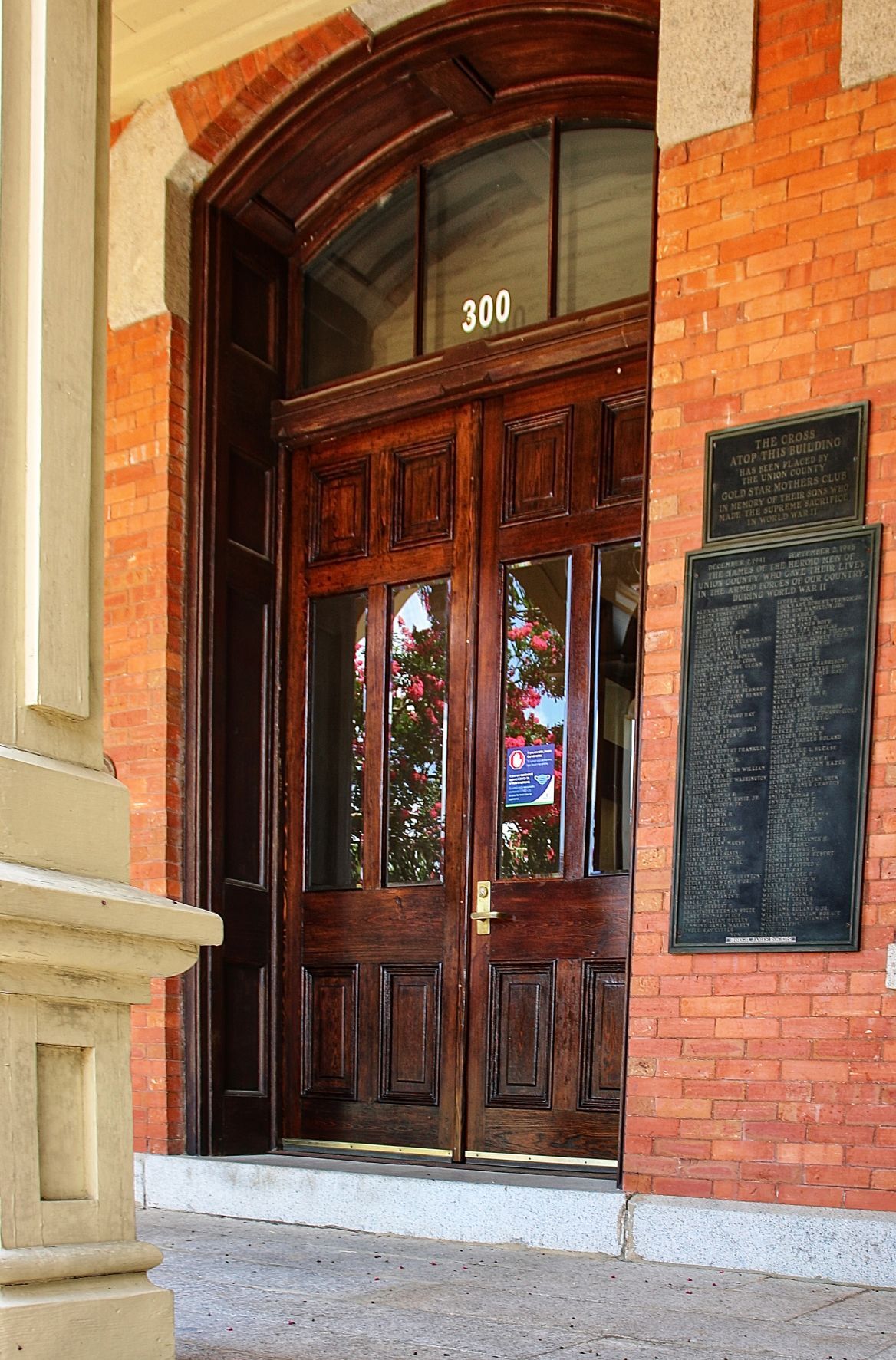 Dale Loberger said he spent at least 100 hours repairing the doors of the Historic Courhouse in downtown Monroe. 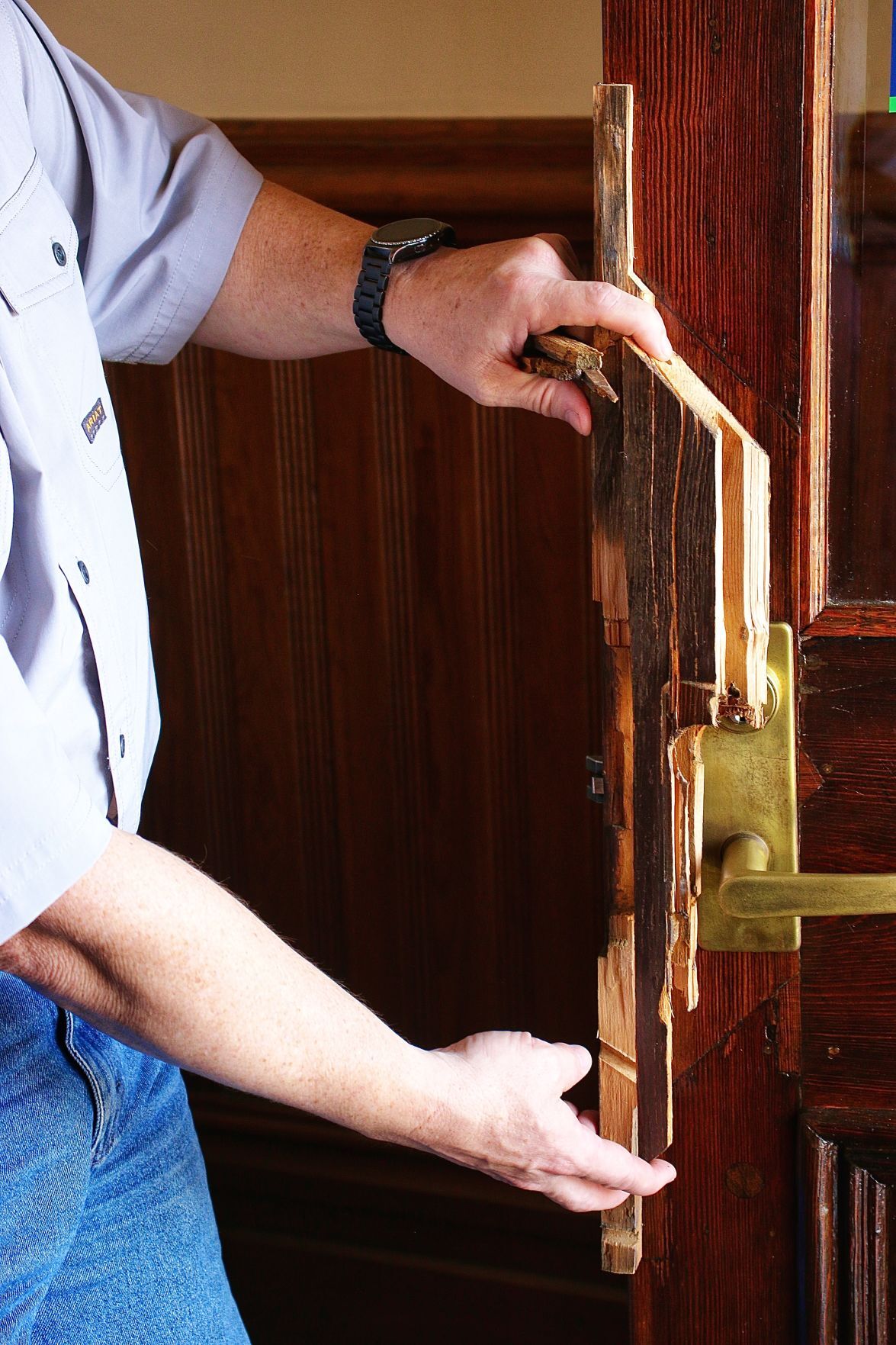 Loberger holding up original pieces from the doors where it was damaged. 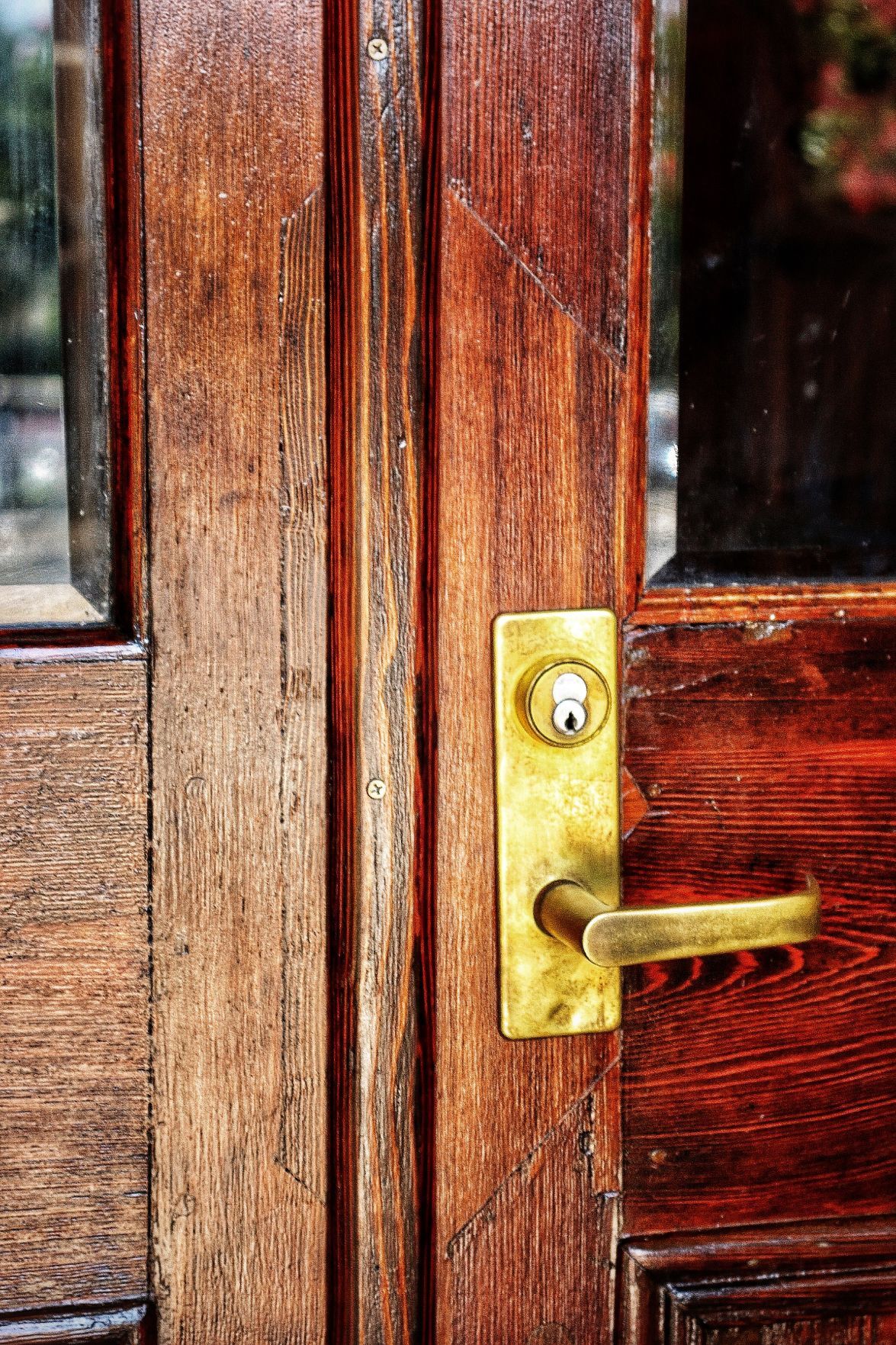 Dale Loberger is shown in front of the repaired doors holding original pieces that were broken off when the doors were damaged.

Dale Loberger points out repair work done on the doors. The glass panes are not original to the doors; however, they have been there for around 50 years, he estimated.

Dale Loberger said he spent at least 100 hours repairing the doors of the Historic Courhouse in downtown Monroe.

Loberger holding up original pieces from the doors where it was damaged.

MONROE — When the doors of opportunity opened for Monroe’s Dale Loberger to work on a historic restoration project, he barged right through.

Loberger spent at least 100 hours repairing a pair of doors from the Historic Courthouse in downtown Monroe after they were damaged in a breaking and entering crime when someone swung a weighted sign at the doors facing Main Street.

Loberger detailed how he would repair the doors, noting his expertise in making reproductions of 18th century furniture. He said he told the county he would do the project for free; however, the county paid him. He gave them a price of about $500. He spent more than $200 on wood (black walnut), stain and finish.

“I figure I made about $2.50 an hour,” Loberger laughed. “I just did it because I love this courthouse. To me, being apart of the history of putting these doors back that they should be was really important.”

Most of the repair work Loberger completed was not in relation to the damage, but repair work that had been done prior. He said whoever repaired the doors before him, did their best but it was clear that they were not skilled in practices used specifically for historic restoration that ensure the historic integrity of a door, building or piece of furniture. Too, he fixed the lock and handle on the door because they started to bend.

He replaced some of the moldings while the rest are original to the 135-year-old doors. He re-stained and refinished the doors using shellac because it’s easier to repair if damaged than using polyurethane, he said. Plus, it’s a material that is similar to what would have been used when the doors were originally built. Loberger stained the doors at least five times to get the right color.

When he finished cleaning out the last repair job done to the doors, he routed a groove into the original door and his replacement piece and then he added a cross-grain tongue so the grain is running in an opposite direction than before. He made the tongue and groove out of black walnut which makes that joint much stronger and it is much more traditional. He had to completely strip the doors, because someone prior put a varnish-stain mix on them which does not allow for refinishing on top of that. He had to go down to the bare wood. He made smaller repairs like making smaller grooves to emphasize the historic charm of the doors instead of trying to make them look new.

The only thing new about the doors, however, is a penny from 2021 that Loberger hid inside the doors so that a future repairman would know when the last restoration was done. It’s a tradition he has been carrying out when making reproduction furniture so that future generations know when it was built.

Loberger had a little trouble getting wood for the doors, but not because of COVID-19 impacting the lumber industry. That wood is modern, but Loberger wanted wood that blended seamlessly with the original wood. He found reclaimed wood from a century-old mill in Greenville, South Carolina that was taken down. The courthouse doors are made from southern yellow pine. Serendipitously, the woods follow the same grain pattern.

For nails, Loberger chose square, headless brads instead of wire nails. Any piece that came off of the doors and not put back was placed into a bucket for Loberger to keep.

Last Friday (July 9), the doors were installed into the courthouse. Loberger and a neighbor wrapped up the doors and with help from Union County Government Public Works they were able to get the doors (that are nine feet tall) back into place.

He didn’t know how much the doors weighed, but said they were heavy for two people to carry.

Loberger’s biggest accomplishment was the lock. He had to replace the entire lock section which meant he had no indication where the lock was supposed to be. Since the original stripe plate was on the opposite door he measured from the top and from the bottom. It was off by an eighth of an inch; therefore, he centered it so that the lock would be centered on where it was supposed to fit within that eighth of an inch tolerance, he explained.

Loberger got it correct on the first try and said he was “so excited” when the doors would close and lock on their own.

Knowing that the doors were restored the right way and seeing them in place at the Historic Courthouse, for Loberger, “to have the original materials of these doors hanging back where they belong so that people will be able to touch these doors and handle them just like they would have originally — that’s why I do it.”

If the original builders of the Historic Courthouse could see Loberger’s restoration work, he would hope they would say “it was the same quality of work that they would have done.”

“I am confident in this repair that it is not only a visual match, but it’s a match integrilly to the door. It’s as strong today I believe as it was in 1886 when they were put in,” Loberger said.

Loberger has a couple of pieces of wood that came off of the doors. He is thinking about giving it to Dean Stump, the owner of The Courthouse Self-Pour Beer and Wine, across the street.

Loberger has an interest in living history and has been doing it since the early 1980’s. Meaning he is a costumed interpreter at historic sites like Historic Brattsonsville outside of Rock Hill. He has been a pewterer, a surveyor and a woodworker.