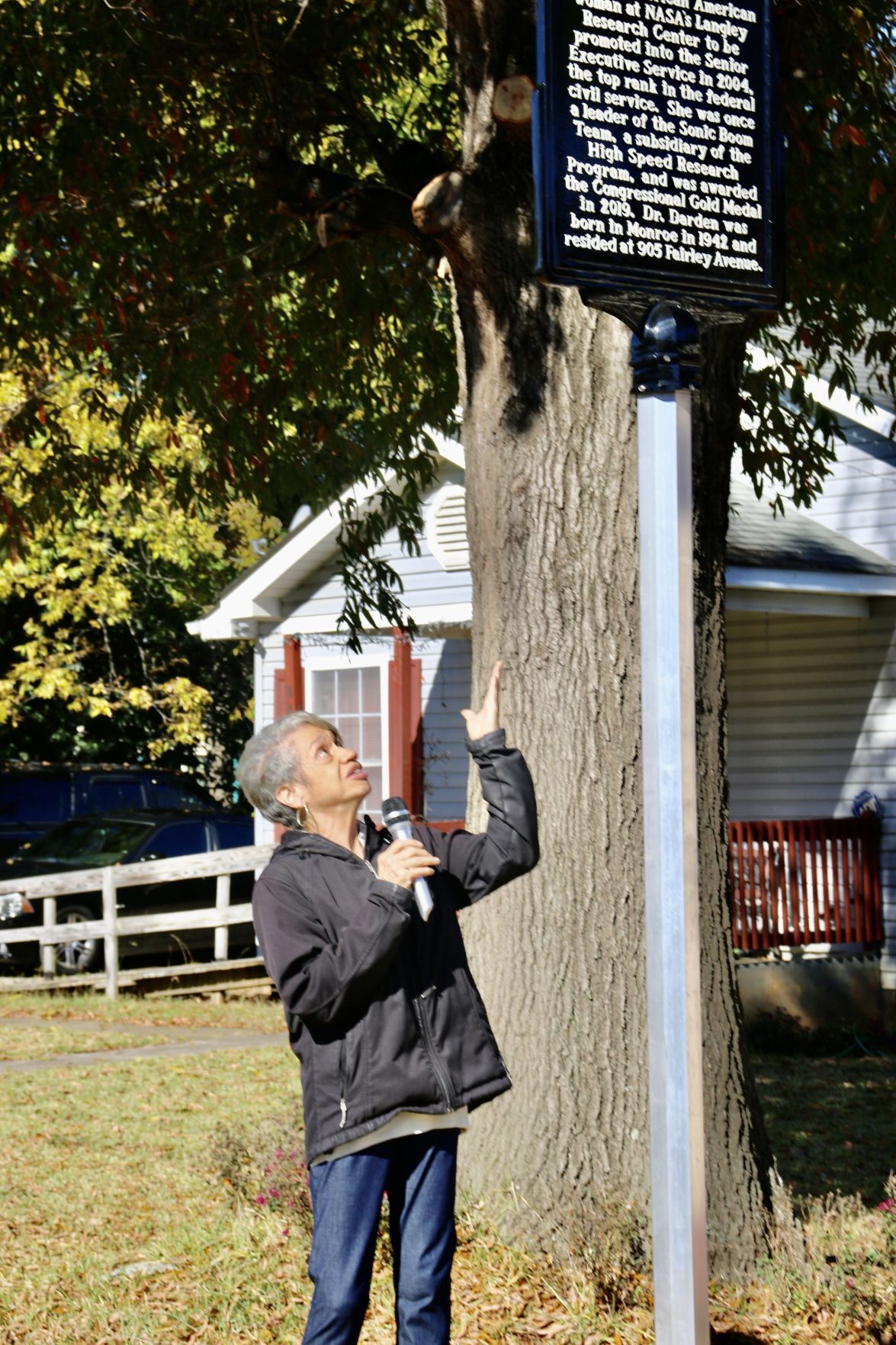 Dr. Christine Mann Darden, pointing at the marker honoring her achievements, is pleased to see STEM courses being promoted in local schools. 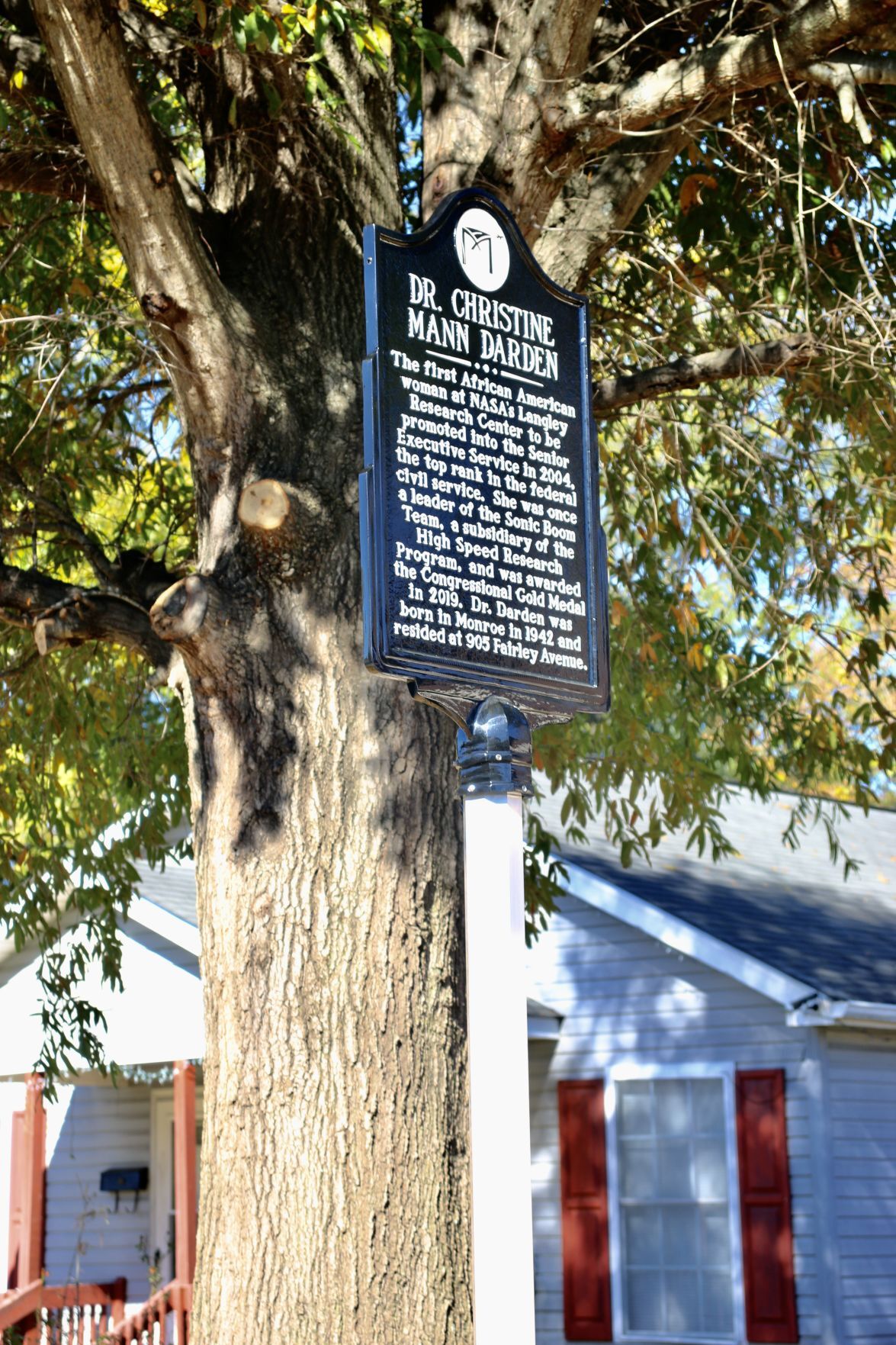 The historical marker celebrates the achievements of Dr. Christine Darden.

Dr. Christine Mann Darden, pointing at the marker honoring her achievements, is pleased to see STEM courses being promoted in local schools.

The historical marker celebrates the achievements of Dr. Christine Darden.

MONROE — A historical marker honoring Dr. Christine Mann Darden was unveiled on Friday, Nov. 12 at her childhood home on Fairley Avenue. The marker was placed by the City of Monroe.

Darden was born in Monroe in 1942. She was delivered in Dr. John S. Massey’s hospital. A historical marker was placed in his honor earlier this year where his hospital was located — the only hospital for African American residents. Massey was the first African American physician in Monroe and Union County. His home and hospital were located on Windsor Street. They were destroyed by a fire in 1985.

She attended Newtown School and later Winchester Avenue School. Darden was surrounded by her fellow classmates at the unveiling.

Darden recalled a time when she challenged the way men and women were employed at the Langley Center after working there for five years in 1973. At that time, she was a data analyst.

Though men and women had similar backgrounds, they often had very different jobs — men usually being in higher ranking jobs. Within two weeks of her bringing up the difference in employment, she was promoted and transferred to an engineering department then told her work would be to minimize the sonic boom.

“Assigned to a sonic boom research working group, she developed an innovative computer code to produce low-boom sonic effects during supersonic flight,” according to the Library of Virginia. She led a group six years later that developed NASA’s sonic boom research program. “Appointed director of the Aerospace Performing Center at Langley in 1999, Darden oversaw research programs in air traffic management and other aeronautics programs. She served as a consultant for government and private projects and wrote numerous publications related to her research. Darden retired from NASA in 2007, having spent her final years as director of Langley’s Office of Strategic Communications and Education.”

In 2019, she was awarded a Congressional Gold Medal of Honor as well as her colleagues whose stories were shared in the book and movie “Hidden Figures.” The Congressional Gold Medal is the highest civilian award. She has been awarded two NASA Medals, the Black Engineer of the Year Outstanding Achievement in Government Award, and the Women in Science & Engineering Lifetime Achievement Award.

At the marker unveiling, Pat Kahle, president and CEO of the Union County Chamber of Commerce, announced that Darden would be presented their 2021 Lifetime Achievement Award.

“I have had a marvelous career,” Darden said. She added that she was “honored” and “pleased” to see the historical marker.

For the past five years, Darden has traveled across the country sharing her story with young people in hopes they will be inspired to pursue their dreams.

At the unveiling, Darden mentioned how much Monroe had changed since she was a child. Her former neighborhood was unrecognizable to her.

After the unveiling, the Enquirer-Journal interviewed Darden. When asked how it feels to be honored with a historical marker and the Monroe Science Center being named after her, she said she was honored and it is very nice.

Darden thinks it is great to see science, technology, engineering and mathematics (STEM) being promoted in schools and more young women becoming interested in careers in related fields.

Darden’s advice for kids from Monroe and kids everywhere is to follow their dreams and take steps to achieve it. Darden asks kids what’s the formula for achieving their dreams — What are the steps that when added together equal the dream they want to achieve thereby creating a plan for success.

“When you run into a problem, don’t quit. Solve that problem and keep going,” Darden said.